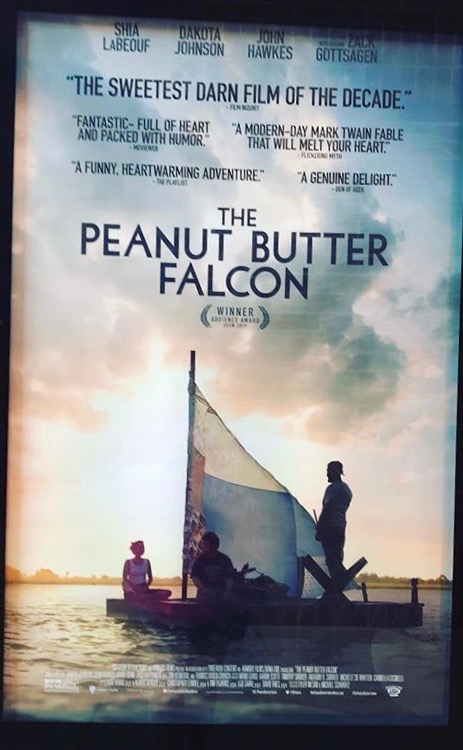 “The Peanut Butter Falcon” may be a quiet indie film that falls under many people’s radars, but it is one that we need to see. It is a feel-gold adventure and a sweet comedy-drama. This is the kind of movie that will quietly steal your heart, break it, and then piece it back together again.

It is a modern Huckleberry Finn story, with North Carolina’s scenic Outer Banks subbing for the Mississippi River and 22-year old Zak (Zack Gottsagen), who has Down’s Sydrome, taking the place of Huck.

Zak is a ward of the state, without a family, spending his days at a nursing home. In his free time, he watches old tapes of Salt Water Redneck, his idol, on the television screen. He watches it enough to drive his roommate crazy. He has a special bond with one of the caretakers at the facility, a young woman named Eleanor (Dakota Johnson).

One day, Zak’s elderly roommate, Carl (Bruce Dern) helps Zak escape the nursing home by breaking open their bedroom window. Zak runs away wearing only his underwear, dreaming to go to Salt Water Redneck’s wrestling school and become a famous wrestler. He runs until he finds a boat to hide in. Even though Eleanor labels him as a “flight risk” and warns him not to leave, he knows that he cannot stay at the nursing home. He wants an adventure, one that will free his spirit.

The adventure starts when Zak meets Tyler (Shia LeBeouf) while hiding in the boat. Tyler is a poor tidewater fisherman with a troubling past, while Zak is an unfiltered, earnest person who says exactly what he thinks. It seems like an unlikely friendship, but the two end up being good friends. Their friendship is one of the sweetest parts of the movie, because of how much they learn together and from each other.

The film is one hour and thirty eight minutes, and it is definitely worth the time. It is co-written and co-directed by Tyler Nilson and Michael Schwartz. Nilson and Schwartz met Gottsagen at a camp for disabled artists, and designed the story around him. This movie is their gift to Gottsagen.

The movie is truly a terrific journey into the human spirit, encapsulating what it means to be young and wild. The story is fictional but contains elements from real life. For example, the movie takes Gottsagen’s own desire to be an actor, and changes it into a quest to become a wrestler.

The film stands out from other 2019 films through its beautiful, warm-hearted take on what could have been a very simple story. Zak is an unpredictable character, exploring life beyond the constraints of his nursing home and genetic disorder. It is a thrill to watch Zak experience many first-times in the movie. His newness to life adds a sense of innocence to the movie as a whole.

Even if you are not an indie fan, you will find yourself rooting for the “Peanut Butter Falcon” (which is Zak’s wrestling name, by the way). “The Peanut Butter Falcon” will fill a place inside of your heart, leaving you with a warm feeling and a smile on your face when the movie is over.