Arena Stage’s “Junk” proves to be quite valuable 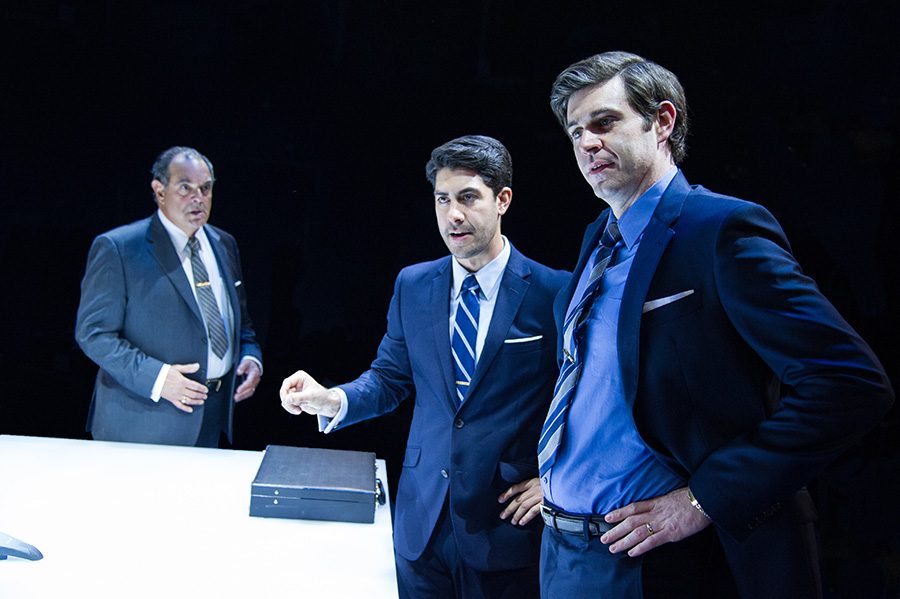 Junk, Ayad Akhtar's Shakespearean paced satire, masterfully grips the audience and keeps this grip from scene to scene, while also packing in rife subtext critiquing money's chokehold on our culture.

Four desks, eight chairs and a whole lot of money—millions on millions. This is the minimalistic scene Arena Stage’s “Junk” sets in the first few minutes of the play, though the play is anything but.

Ayad Akhtar’s “Junk,” being performed at D.C.’s Arena Stage from April 5 to May 5, chronicles the junk bond giants of the 1980s, specifically following the brilliant and calculating giant Robert Merkin (Thomas Keegan) as he prepares a hostile takeover of a family-owned manufacturing company with no regard for where the line is drawn. The play explores how the greed, power and wealth of these giants metamorphosed the rules of Wall Street and society as we know it today.

Part of the allure of the play is that not only does it characterize the ‘80s as a money-hungry era, but it systematically creates a satirical view of modern-day American society.

As a child, it’s hard to differentiate between those who have money and those who don’t; we’re too focused on hanging on to the monkey bars for just a little longer, memorizing the next part of our times tables and playing four square on the playground.

Then little by little, the older you get, the more apparent money becomes: and it’s everywhere. We see it in the shoes people wear, in the phones they hold, in the clothes they buy, in the places they go. We see it so clearly in every moment and yet, we have no hold over it quite like the way it has over us.

We’re motivated by it, amused by it, torn down by it, pressured by it, controlled by it. The question is why. “Junk” answers that question in the most honest of ways.

While it’s hard not to get caught up in the fast-paced economic jargon spewed throughout the narrative (at least if you’re not an economist or financial attorney), the almost Shakespearean-paced play is meant to keep pulling you forward into the next scene and the next scheme, successfully pushing you towards the “why” of money. One of the greatest things about the financial jargon is that when there’s something to be said that doesn’t contain it, you understand what is said ten times better than you would normally.

In one very stand out moment, Judy Chen (Nancy Sun), who is writing a novel covering the rise of junk bond giants, including Robert Merkin and Leo Tresler (David Andrew MacDonald), says that those who are rich and seem greedy, like the junk bond giants, would rather not be rich as to not seem greedy. One the other hand, however, the junk bond giants—and further, everyone else too—would rather not be poor and be seen as less than; quite the catch-22. The sentence, embedded within an unintelligible vernacular of money men and women, strikes the audience with its unnerving paradox, becoming a resounding and prevailing thought that calls to action a question and reflection of self and societal postulations.

While each scene takes place in some sort of office, home or restaurant, every single one of them could almost be pictured as if on a tennis court; Back and forth arguments and transactions being pelted from one side to the other with a sense of urgency, only being over when lost.

Thomas Keegan’s portrayal of a high and mighty, untouchable junk bond giant creates such an overwhelming presence that it’s impossible not to quite literally feel how much power and control such men had over Wall Street in the later 20th century. Perry Young’s presentation of his character, Raul Rivera, evinces the artistic ability of lawyers to shape the law to support the greed that colored Wall Street.

By the end note of the play, it becomes a formidable fact that this way of life has become so ingrained into society—not just the junk bond giants and not just in the ‘80s.

It’s hard to see the appeal of “Junk” to any high schooler; we’re not economists, we’re not lawyers, we’re not adults, we’re just kids. But that right there is the driving force behind the necessity of “Junk” to people of all ages. While it’s hard to convert a society so driven by prosperity, there’s a value in being conscious of the supremacy we give to capital—a non-minted value.