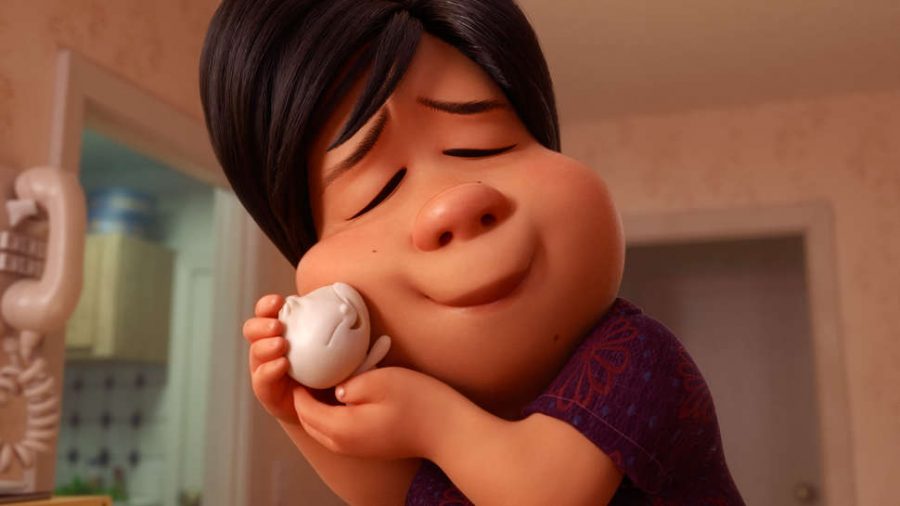 the Oscar award winning short film, Bao, is depicted of a the mother with her baby dumpling.

Pixar has recently become an avid supporter of cultural inclusion through its films like “Sanjay’s Super Team” portraying Indian culture, and “Coco” portraying Latino culture. To add another one to the list, “Bao” is an eight minute short film taking a bite into Chinese culture in a way that will make you rethink your perspective on dumplings.

Premiering before “Incredibles 2,” “Bao” is the first Pixar short film to be directed by a woman, Domee Shi, who was inspired by her childhood as growing up the daughter of Chinese-Canadian immigrant parents. The short film follows the a Chinese-Canadian mother who is struggling with “empty nest” syndrome, but earns a second chance at parenting when one of her homemade dumplings comes to life as a tiny, giggly baby.

Bao, the dumpling, is one of the main characters. Starting as an ordinary dumpling, Bao suddenly comes to life, sprouting tiny arms and legs from underneath its dumpling head, as the mother is making them. Instead of eating Bao, the cook chooses to mother Bao as if it were her own child.

The mother nurtures the baby Bao as it grows up. At first, their relationship is harmonious and sweet, with the mother constantly doting on Bao and the dumpling following her every move. However, the relationship gradually turns sour as Bao grows up and becomes rebellious and starts ignoring her treats and distancing itself from her.

Eventually, Bao grows up and determines that it wants to leave the house. The two get into an huge argument and in an act of desperation, the mother grabs and eats her beloved Bao.

This scene has become to be controversial. It is left up to the audience to determine whether the eating moment was a mother’s attempt to protect her baby or the mother’s acceptance that there was no other way to keep her child safe without losing him. Either way the scene was an emotionally raw moment that resonated deeply with many children of Asian immigrant parents.

The release of “Bao” has marked a major step for diversity. In a usually white male dominant industry, this short film is notable in that it is the first Pixar film to be directed by a woman, and by a Chinese-Canadian woman no less. “Bao” also gives us an important glimpse into chinese culture. According to Shi, portraying the child of the family as a bao poses as an important metaphor about the typical life in a chinese household.

“Food is just a way of communication for my family in particular so I felt like a Bao and food was just a great metaphor to kind of play with the story about a parent learning to let go of her child,” said Shi.

“Bao” provides a strong message about the joys as well as hardships that come with parenthood. Though the short film centers around an Asian immigrant family, the story is relatable to all families. A parent’s reluctance to let their child leave the nest is universal.

Even without all the cultural nuances, “Bao” is all about growing up. It forces viewers to step outside of their own perspective and understand the other.