Anything Goes is a big hit on Arena Stage 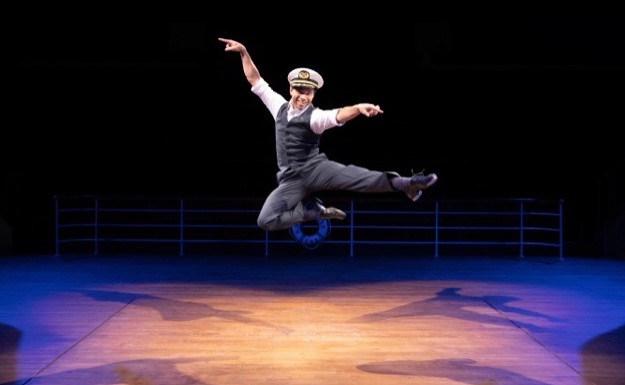 Arena Stage's Anything Goes takes place on the S.S. American ship and displays the interconnected lives of passengers on their way to London.

I’m not quite sure what I was expecting when I first went to see Anything Goes, though I can honestly say that what I watched was a hundred times better than anything I could’ve imagined.

Anything Goes is a musical (originally from Broadway) that is being performed at Arena Stage in D.C. from Nov. 29 to Dec. 23. The musical takes place aboard the S.S. American ocean liner boarded by nightclub singer Reno Sweeney (Soara-Joye Ross), stowaway Billy Crocker (Corbin Bleu), debutant Hope Harcourt (Lisa Helmi Johanson), Harcourt’s fiancé Lord Evelyn Oakleigh (Jimmy Ray Bennett), “public enemy” Moonface Martin (Stephen DeRosa) and his sidekick Erma (Maria Rizzo). Crocker boarded the ship for his love Harcourt, who also struggles with admitting her love for him, and becomes engaged in a hectic, enthralling and comedic storyline of hidden criminals and true love.

Arena Stage is home to a couple different theaters, and “Anything Goes” takes place in an interesting one. The theatre  is shaped like an arena, meaning that there is a stage in the middle and seating surrounding said stage in the form of a circle, which makes for quite the design. Not only did every seat in the house have an excellent view of the work on stage, the intimacy of the theatre made every viewer feel as though the play was being performed just for them.

The performers, creatively using the stage to their advantage, came into scenes from the top of stairs leading to the stage, from a riser underneath the stage, and in all different ways, each and every entrance perfectly practiced and construed.

When it came to scenes of Billy and Hope, admitting their love for one another alone on the deck of the ship, it felt as if the audience was intruding on a private moment, not watching a practiced performance. When Reno’s girls would lean against the “deck” railings to look out across the ocean, they were really looking out into the audience, though every single one of them was able to create and captivate the idea that they were indeed gazing off into the rippling blue and green unknown.

The performers brought every single character to life, each one crafted to the point where even thinking that the characters were constructions of fiction was an impossible feat.

For the performers themselves, each and every one of the characters who stepped onto the stage and took the audience’s breath away through song, truly deserves another round of applause.

Soara-Joye Ross played Reno in such a way that her singing became soul-searching and humble, yet slightly devious—the perfect combination to draw viewers in.

Corbin Bleu’s ability to sing both as Crocker and as Crocker disguising himself as an old lady was both impressive and amusing to watch. Aside from his stellar ability to express emotion through song, Bleu’s dancing abilities brought many of the show’s scenes to life.

Bleu’s ability to effortlessly hold the attention of every single viewer as he swings Hope Harcourt around or pulls her in close during a slow dance, or even as he delivers an upbeat number with Reno, increased his character’s level of enticement.

Even so, more of what helped to craft such believable characters, besides the performers, was the costume and set design.

The first costume that commanded the stage was Reno’s nightclub outfit in the first scene. The dark, elegant emerald silk coupled with her dark green, almost black fur shawl gave viewers the impression of elegance, class, charm and power.

Throughout the rest of the show, Reno exhibited every one of those characteristics, with her outfits matching her ‘woman-in-power’ attitude.

Aside from Reno’s outfits, every single characters’ outfits were perfectly tailored to further develop who they were and, furthermore, who they wanted to be. While each costume was masterfully crafted and showcased, the way the little details of each costume immersed the audience into the scene was truly a highlight—from Hope’s mother showcasing all of her jewelry as though she needed to save those pearls from drowning, to Lord Okleigh’s undergarments coupled with his ridiculous socks as he prepared for tea with his idol, Reno, to Reno’s Angels’ matching beauty cases.

Pairing with the costumes was a humor that could only be found in a play such as “Anything Goes”; a humor that was not only relevant to the times, but also to every single member of the audience.

Laughs could be heard throughout the arena as Reno or Lord Oakleigh had one-liners aimed at either current society or current politics while the subtle minor characters of the two Chinese ‘converts’ added to the lighthearted tone.

All in all, the costumes, coupled with the set, the performers, the humor and the overall talent displayed throughout the show, created an environment that transported viewers onto the S.S. American ocean liner, and brought them along for the entire journey.