Logic returns to his mixtape roots 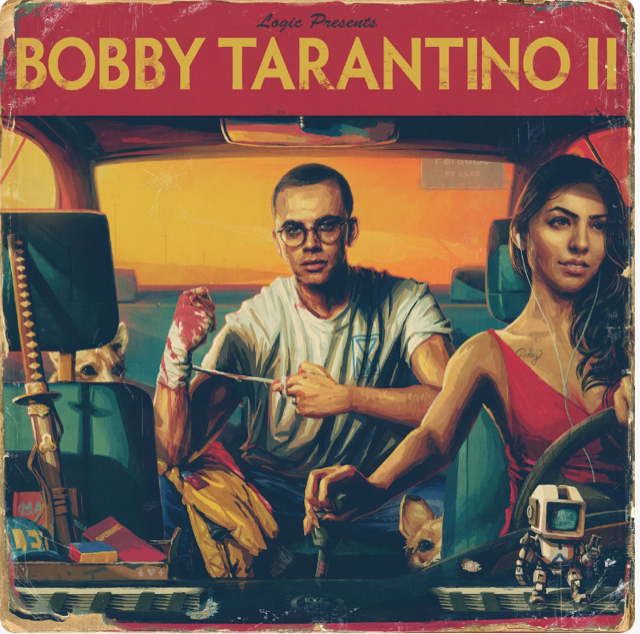 On one of hip-hop artist Logic’s songs entitled “Everybody,” he raps, “OK I was gone for a minute but I’m back now. Sit the f*&% down.” With the recent release of his mixtape “Bobby Tarantino II,” listeners might wish he had never left, and wish he won’t ever go away again.

Logic released “Bobby Tarantino II” on Mar 9, one year after the release of his smash album “Everybody.” This mixtape allows for Logic to return to his mixtape roots that his fans seem to miss from “Everybody.” It contains fun and enjoyable music that feels very organic compared to other hip-hop songs.

The mixtape starts off with a two minute spoken recording called “Grandpa’s Space Ship.” The recording is a conversation between Rick and Morty, characters of an Adult Swim animated comedy show by the same name, discussing the good and bad of listening to Logic, and how “mixtape Logic” is always a better option compared to “album Logic.” Since Logic has appeared on Rick and Morty, the show decided to return the favor by advertising Logic’s new mixtape, and the recording of the ad became the first track on it. This allows for Logic to set the tone for the entire mixtape. From the very first sound listeners hear, this establishes that the music is going to be casual stuff that people will like and want to listen to.

Logic then goes into “Overnight,” followed by “Contra.” The former takes on a more technological sound, giving off the vibe of an arcade, while the latter demonstrates more mainstream rap-style, but with Logic’s organic and pop-like voice. Logic takes mainstream hip-hop beats and raps over them with a very organic and normal sound, a voice that isn’t autotuned. It’s surprising how well the two styles seem to blend and work together so well.

Then comes “BoomTrap Protocol,” and “Yuck.” Both songs have great lyrics that flow very well with the beats, and they are a more normal style of rap, which gives appeal to the normal rap listeners who might not be a fan of Logic’s work. Logic is able to prove that he can give listeners the same old rap that fans want to hear, but through his other songs he is able to do so much differently.

After five solid, fast paced songs, the next couple songs seem to take a turn to music that is more calm and relaxing. This section is the best part of the whole album, having the songs “Indica Badu,” and “Midnight,” to prove it. The first song has a very simple drum beat with very euphoric and hallucinogenic sounds to go along with it, and has an outstanding feature from Wiz Khalifa. The second song has a slow hip-hop beat, with very strong and fast rapping over it that combine to make the perfect mix of high and low energy, which makes listeners loosen up while listening to it.

“Warm It Up,”gives off a more old-school style rap with another incredible feature,from Young Sinatra. Both rappers are able to show off their incredible skills in this song as they go into double and triple time lyrics that speed the song up.

“Wizard of Oz,” brings the energy back up to a faster pace. The whole song is rapped at a much faster speed than the beat it’s rapped over and it almost seems like Logic is trying to fit as many words as he can into each couplet. He makes it sound so easy, like it’s natural for him to rap that fast, and it’s  so impressive to listen to.

If there is a weakness to the entire mixtape, it comes with the next two songs. “State of Emergency,” has a feature from 2 Chainz that doesn’t sound like anything special, and does not impress with either the pace or the actual sound of the beat underneath. While “Wassup,” has a decent feature from Big Sean and decent music in the background, it still falls flat compared to the other songs on the album.

But have no fear, Logic redeems himself with the last two songs on the mixtape, which also happens to be the two singles off the mixtape. “Everyday,” is a song co-written by Marshmello and includes very strong vocals from Logic, a very catchy chorus, and an overall nicely put together song that could be the one that lasts the longest in listeners minds. “44 More,” demonstrates yet again Logic’s incredible rap abilities and knack for partnering good beats with good rap timing. As one of the singles that was released before the entire mixtape was, this song serves as a nice preview and sums up what’s to come from the mixtape.

Overall, Logic’s “Bobby Tarantino II,” was a huge success. Those who missed Logic’s mixtape days were able to get a blast from the past, and those who had never listened to him got a good feel of who he is, and now might want to go back and listened to his older and similar music. Those who have the chance to listen to it definitely should, and when they do, they’ll only get more and more impatient waiting for Logic to come out with more music. It’s that good.