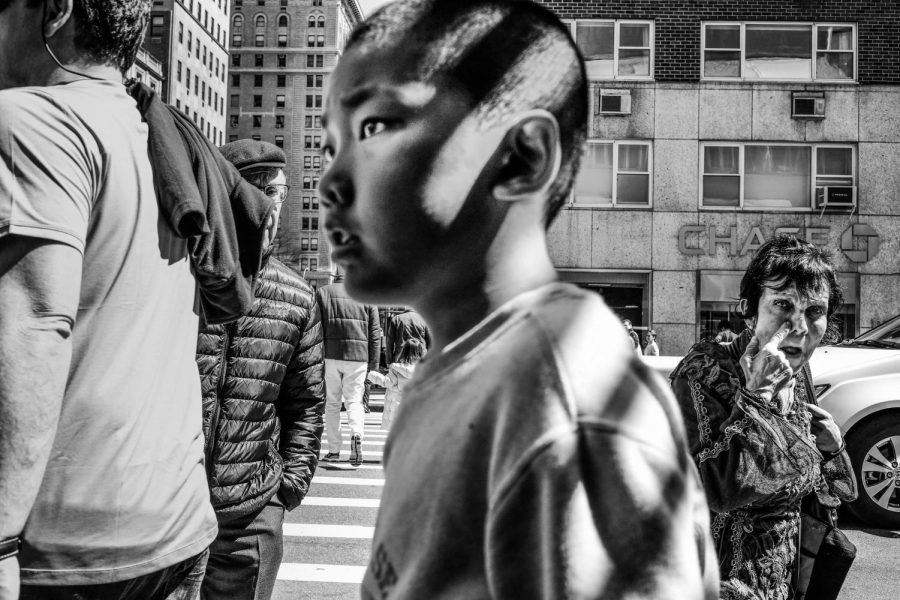 Some students find exhilaration in playing a championship sports game. Others enjoy writing stories or poems to express their thoughts and feelings. For junior Dylan Fan, photography is his way of expressing himself and finding entertainment at the same time.

Aside from photographing for his own enjoyment, Fan has been contributing photographs to the CHS yearbook for a year and has entered 14 photography competitions. One of Fan’s largest accomplishments in photography was winning the Nature Visions competition Nov. 14, which was open to high schoolers in MCPS and neighboring school districts. His winning photo portrayed a child with an older woman in the background on a crowded street of New York City.

“Winning was really euphoric,” Fan said. “It felt unreal to be on stage in front of so many people. After my name was called and I went to the back, I thought I hadn’t won.”

Fan was inspired by his uncle, who is a professional photographer, to begin photography.
“He has a major presence in the photographic world as a representative for Leica, Hasselblad and now Sony,” Fan said. “He prompted me to try messing around with cameras and I ended up falling in love with photography.”

Finding inspiration from ordinary people and his surroundings, Fan prefers street over landscape photography. Street photography features random encounters in public places, and these images often highlight and tell a story of people in their natural environment.

“My favorite subjects are people and any scene with a minimalist potential,” Fan said. “I am ever inspired by my surroundings, but mainly by the chase for the perfect timing since street photography is all split-second chance taking.”

Fan often participates in photography shoots with junior Soroush Etemad. Etemad is more interested in landscape than street photography, so the pair learn from each other about these types of photography.

“Dylan has inspired me to pick up street photography and to look at things in a more artistic way,” Etemad said. “Our shoots consist of urban photography in Washington, D.C.”

In addition to photography, Fan enjoys drawing. In particular, he creates sketches of industrial designs, which include products that will be manufactured through mass production.

“I’ve always been really critical about details and functionality, and I love design,” Fan said. “Some of the photography is influenced by my appeal to design, as a lot of the photos I take are a result of me spotting interesting things in a scene.”

According to CHS photography teacher Amy Gilbert, Fan’s photography is unique because he finds a special moment that others would often overlook.

“He likes to look at what’s going on around him,” Gilbert said. “He uses color well, and pays attention to light and perspective.”

Fan uses photography as an outlet to express his ideas and thoughts about the world. From his role as an attentive observer, Fan chronicles stories and emotions through detailed artwork.

“To me the world is like a design that must be observed and thoroughly documented,” Fan said. “It’s a way for me to communicate for others. My camera is a database for everything my eyes have seen.”

Fan’s attention to detail has not gone unnoticed by his family. According to Fan’s mom, Amy Sun, Dylan has been “keen to details and lines” since he was a toddler.

“I knew he could pursue art since he was three years old,” Sun said. “He has always had great special awareness. These things coming together make you have natural talent in art and photography.”

Fan’s natural talent and dedication to the art of photography could lead him to a career as a photographer.

“In my view, as long as you pursue your passion vigorously, you will be successful,” Thomas Fan, Dylan’s dad, said. “When he was little I wasn’t sure about a career in art, but now that I know more about a future in art, it is definitely feasible if he tries.”

Although he has support from his parents in pursuing a career in photography, Fan dreams of becoming a designer of products or vehicles.

“I plan to major in industrial design, but whether I choose between product design or vehicle design within the field is yet to be decided,” Fan said.