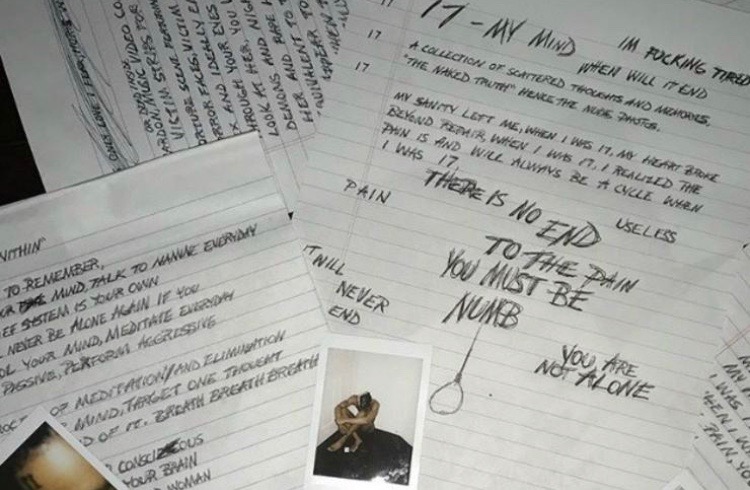 And then there’s us: the buyers, the listeners, the supporters, the fanatics.

We find a song or an artist through a friend, a radio station, a Spotify playlist, or in the case of XXXTentacion’s album “17,” through SoundCloud, and we break the replay button for the amount of times we want to hear the song again and again.

For me, I found out about XXXTentacion, born Jahseh Onfrey, by chance during an arbitrary game of celebrity smackdown, and then precedingly forgot about the artist until I heard the song “Jocelyn Flores,” the first song on the album following the interlude.

“Jocelyn Flores” is a half-singing, half-rapping ballad dedicated to a friend of X’s who committed suicide in a hotel room months before the album’s release. As X begins the song singing that “I know you so well,” it re-evaluates the idea that you can think you someone so well and still not know what’s going on their mind.

The chilling vocals and background echo applied to the track starts the album off on a whole new level of lonely bedroom R&B and gut-wrenching emocore, emotional hardcore, music that is a cry out to the world about issues prevalent in society that no one seems to be talking about, including suicide, mental health and depression.

X sings that he “be feeling pain just to hold on,” which for those who have suffered or still suffer from mental health issues have at some point been able to relate to. The sad fact is that feeling something, anything, is better than feeling nothing and in “Jocelyn Flores,” X relays how he struggles to feel anything and to deal with all the death around him, but he’s pushing forward.

Throughout the album, the songs, so utterly heart-wrenching and raw, give us a peek into the artist’s mind and, further, his soul. He states this in his interlude “The Explanation,” telling listeners that the album is his “collection of nightmares, thoughts, and real life situations… [his] pain and thoughts put into words.” X explains that in this album, “you are literally entering [his] mind” and hearing his innermost thoughts and feelings, which makes sense in regards to the fleeting length of the songs on the album, most of which are less than 2 minutes—as if they’re fleeting thoughts.

X denotes that he hopes the album will “help cure, or at least numb your depression,” which is a bold statement that implies two things. One, that X can relate to his audience in regards to depression and two, the album, which consists of 11 short songs, will be full of emotional and soul-bearing and music.

After X starts off “The Explanation” with a voice so honest and soulful that one can just imagine X recording alone in a room and after he proceeds with “Jocelyn Flores,” he follows through with “Save Me,” an obvious cry for help that follows through with the idea that each and every one of us needs to be saved from something.

He then continues on to “Dead Inside,” the sixth official song on the album, which is an interlude under 2 minutes.

With “Dead Inside,” the bedroom, headphones, rainy night R&B vibe continues on. The melodic piano backs X’s numbing vocals, which seem almost as if he’s standing away from the mic and reluctantly letting the words fall out. With each line, however, it’s easy for listeners who, most likely, are in high school, to relate to and to empathize with X’s words.

X sings that he spent “a lot of time stuck in this head of mine” and “seen the vivid pictures in [his] head” which is an all too familiar feeling for almost everyone. It’s human nature to overthink and analyze and to make matters worse, we are always with our thoughts, practically stuck in them and sometimes the only feeling left is emptiness and nothingness—which is exactly what X is able to convey.

X closes the album with “Ayala,” the outro and 11th final track on the album, which references X’s ex-girlfriend, Geneva Ayala, who X was accused of assaulting. X now faces charges of domestic abuse but has not yet been convicted of any of the alleged charges.

The issue of X closing the album with Ayala is a moral one. Throughout the whole album, X conveys his depression and bears his soul to admit his mistakes throughout his past 18 years of life. By the time listeners reach the last song, they are already entranced with the rest of the songs and  finding out about X’s past puts them between a rock and a hard place.

Do they stop listening to this soul-thriving music because of X’s alleged actions? Do they have the right to support X and, as seen in the YouTube comments for each of the album’s songs, say that he is their “idol”? Is the album actually X’s way to ask for forgiveness and explain his motivations?

There’s no way to answer these questions.

Yes, as stated in “The Explanation,” we had the privilege of entering X’s mind, but all the same, the piece of his mind we entered was just the part he wanted us to see.

One can’t attest to the fact that surely X didn’t commit those alleged actions or that surely X couldn’t even commit such actions, especially if his mind and his heart have been damaged so much, which furthers the moral dilemma facing both old fans and new fans of his music.

There’s no denying that 17 is good—great, even—but the ethics of listening to an artist who’s preaching to a choir of kids who want to so deeply believe in X’s words even though he sings in track five about the “Revenge” he wants, which alludes to his ex-girlfriend and their past together, creates a morally arguable circumstance—especially concerning the amount of media coverage of sexual abuse stories that have been uncovered in the past few months.

I’m not saying don’t listen to X’s album—quite the opposite actually. The soul and feeling that is amplified in 17 is a sound I have yet to find in many other artists and deserves to be heard, even though it may be mixed with an immoral concept. X’s actions aside, the album itself is a true example of what it’s like to be depressed, heartbroken and struggling to cope, which are all things that teens can be reflective of or have experienced themselves.

Moreso, the album name itself, 17, has significant meaning to X, as seen in the “17” tattoo he has on his forehead.

According to 17’s page on Genius, a music site that provides information behind the lyrics and songs on certain albums, the number 17 most likely is representative of X’s last year on earth, with him originally planning to die at 18.

X has yet to state if that is in fact the true meaning behind the album title but either way, 17 is a coming-of-age time for high schoolers where they have to learn how to cope with emotional problems, mental illnesses, stress and depression, and X’s album provides a way for them to relate to someone and not feel so alone in their thoughts.

With the recent suicides in Montgomery County, administration at CHS has been announcing that students should speak up if someone looks depressed. As X sings in “Jocelyn Flores,” it’s so hard to tell if someone is depressed, especially because it’s so easy to hide.

X used his music as a way to speak up about and against his depression and concerns how he copes with the suicide of his friend. Throughout the album, X throws listeners a lifeline of feeling, instead of just letting people sit numb.

Mental illness, depression and suicide are never easy things to talk about but just because it’s hard doesn’t mean they shouldn’t be discussed. X’s album goes to expose the truth behind these three things, which directly contrasts how much of society has decided to skim over these truths or, even worse, overlook them all together.

X’s album is a major step in the right direction concerning the discussion of mental health. Though listening to the album may be a gray area, and although supporting X is a gray area, the pure raw emotion infused in each and every track on this album is enough for me to sit in bed, pop in my earbuds, close my eyes and listen to X’s words.