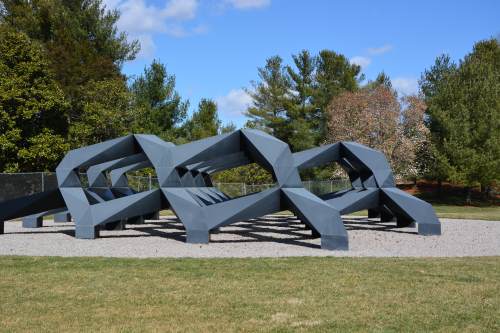 “Split Rocker” by Jeff Koons is an outdoor sculpture at the Glenstone Museum. In the spring and summer, it is covered with flowering plants.

The Glenstone museum is a private art collection, tucked away on Glen Road, that presents a modern, fresh and contemporary twist on a traditional museum setting.
Established by the non-profit Glenstone Foundation in 2006, Glenstone Museum has become a prized secret in our area.
According to the Glenstone Museum website, the founders, Mitchell and Emily Rales, have carefully selected works that chart significant historical shifts in the perception and understanding of art.
But what makes Glenstone so unique is that it seeks to establish a connection between art, architecture and landscape.
One of their most notable pieces, which can be seen from the outside, is the “Split Rocker” by Jeff Koons. The piece is a whimsical but enormous form of one-half of a pony’s head joined to one-half of a dinosaur’s head, with both halves making up a rocking horse. During the warmer months the structure is covered by approximately 27,000 live, flowering plants.
A recent addition to the Glenstone Museum is an exhibition by Roni Horn, an artist known for drawing her inspirations from a wide variety of ideas, from Emily Dickinson to the landscape of Iceland.
According to the Glenstone Press Release, they have made it possible to put together a show presenting the full scale and complexity of Horn’s efforts. The range of works includes drawings, photo-installation books, and sculptures.
Walking into the expansive installation, I was immediately intrigued by the pink cube that almost seemed to float in the center of the room. “Pink Tons” is made from solid cast glass, and it’s solidarity in the space allow it to be viewed from numerous angles. The glass allows the piece to be opaque, translucent, and transparent which creates a bottomless depth to get lost in.
“I thought Pink Tons was interesting,” senior Dilene Upendra said. “The piece made the observer engage with it and move around to see different depths inside of the glass.”
In the adjacent room lies the “White Dickinson” series, a set of aluminum beams with plastic inserts that spell out phrases from the poet’s journal. Each beam is presented in a specific orientation such that the viewer must search for the right perspective in order to see, for example, “the stars are not hereditary.”
As a writer, I was intrigued by the large collage like works, made of cut strips of pigmented paper, glued together and then annotated with colored pencils.
One such piece “Or 7” contained various scribbles of African American singers such as “Billie Holiday” and words such as “boss”and “attack” surrounding it.
The collage pieces are almost like a puzzle, one that I wished to decode during my time at Glenstone. Each collage is unique bringing different ideas and themes into the picture. But yet, the pieces have a way of constantly changing and with each glance a new detail is revealed.
For the lay museum goer, the set of fifteen offset lithographs that compose “Still Water,” are a delight. Each piece was taken of the Thames River, in England, at the same location but different environmental conditions. I often wonder what the artist was thinking as they created.
The lithographs contain minute numbers that correspond to footnotes such as “I am the Thames,” “We cannot accept that water can change” and “Is water sexy?” I felt a connection between Horn and myself as I read her thoughts, some of which were funny and others which made me stop and think for a minute.

“It was personally one of my favorites,” junior Julia Chien said. “I just thought there was such a sense of humor with it and it really got you to look at the piece and really search for the numbers and corresponding footnotes.”
The Roni Horn Exhibit is unlike anything other I’ve seen, and it will be in place until January 2018.