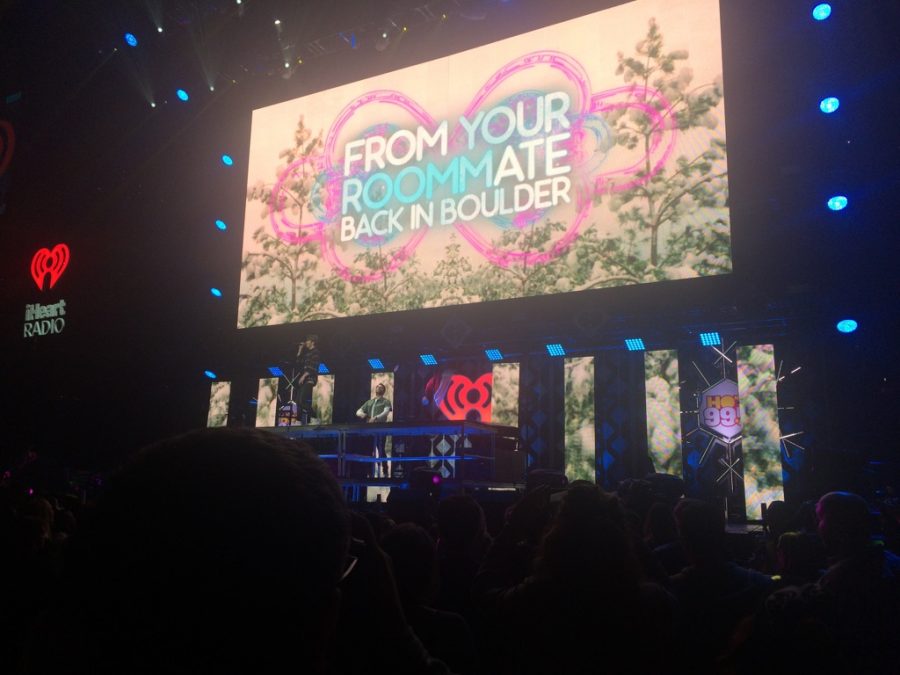 A snippet of The Chainsmokers' lively performance at JingleBall.

‘Tis the season of (holiday) music, spirit, friends and family. The mash-up holiday concert known as “Jingle Ball” is a combination of all four of those things.

For many years, iHeartRadio has been teaming up with Capital One to bring residents of the D.C. area a concert that hosts a snapshot of the most renowned artists of the year. This year, the lineup included Fifth Harmony, Alessia Cara, Tove Lo, Daya, Diplo, Ellie Goulding, a Special Guest appearance from Niall Horan, G-Eazy, DNCE, and The Chainsmokers.

Seemingly a concert for young teenagers, the crowd ranged from sleepy 8-year-olds to couples on date night to parents with and without their children.

The Verizon Center was tightly packed with eager audience members. Prior to the show, attendees were passing out reindeer ears and Santa elf hats to bring some holiday spirit in the concert.

The show started off with a one minute countdown. The whole room watched as the numbers dwindled down from 60 to 10, then began counting down until 0 hit. Once the countdown was over, the first performers, Fifth Harmony, took the stage.

Fifth Harmony was a perfect selection to start off the show. They sung popular songs that the majority of the crowd could sing with, while bringing an animated spirit for performing that few other performers did that night. They were able to capture the audience and keep them wanting mor, which is usually a hard task for opening performers.

The only downside to their performance was their dancing. While well choreographed, it was on the more sexual side, especially considering that there were many elementary and middle schoolers in the audience.

When Alessia Cara took the stage, her performance was quite different from Fifth Harmony’s. Dressed down in sweats and no makeup, her performance was raw and focused on her music more than anything else. Her music and her performance as a whol, portrayed the message that it is absurd for young girls to grow up thinking that society expects them to fit into certain molds.

Tove Lo performed both this year and the last. Both years, her wardrobe was obscene and rather revealing for the audience. Her songs mostly consisted of songs off her previous album, which she had already sung at Jingle Ball the year before. Her dance moves were uncomfortable to watch as well, and it seemed like she was mimicking insect movements rather than trying to dance.

The singers after Tove Lo were good but not memorable. Daya, Diplo, and Ellie Goulding performed in such a way that made them seem like just any another artist in the concert.

The surprise guest appearance from Niall Horan had the crowd going wild. Girls of all ages were shouting and practically in tears at the sight of the former One Direction member. He performed his solo single “This Town” with only a guitar in his hand and a love for music in his heart. His performance revived the excitement for the end of the concert.

G-Eazy’s time spent on stage was short but well-lived. A crowd favorite, he sang popular songs that had the crowd throwing their hands in the air. Although not an artist for little kids, seeing as his music includes curse words that would make even your grandmother blush, he was worthwhile for the members of the audience who were in or who had graduated high school.

Second to last was DNCE, which includes former Jonas Brother member Joe Jonas. Their songs were popular for the most part and were full of an energy and excitement that had died out earlier in the night and had only reappeared after Niall Horan.

Before The Chainsmokers appeared as the final artist of the night, the radio announcers of iHeartRadio who had repeatedly been appearing all night to introduce artists appeared again. Dressed from head to toe in celebratory holiday gear, they gave away another set of free Six Flags tickets to people in the audience before announcing The Chainsmokers.

The Chainsmokers brought together music from the 80s and 90s as well as their most popular songs to bring the whole audience in for the ending. Everyone, from the previously sleepy 8-year-olds to couples on date night to parents with and without children, were on their feet.

The two artists who make up The Chainsmokers, Andrew Taggart and Alex Pall, were able to bring the to an energy-filled close and make the audiences want to come back next year.

Jingle Ball as a whole was a show that while not fully bringing around holiday spirit, brings spirit of family and friends on its own. It’s a great way to start the holidays and a quick gift for your loved ones. A night to remember, Jingle Ball is one of the concerts you want to experience at least once in your life.