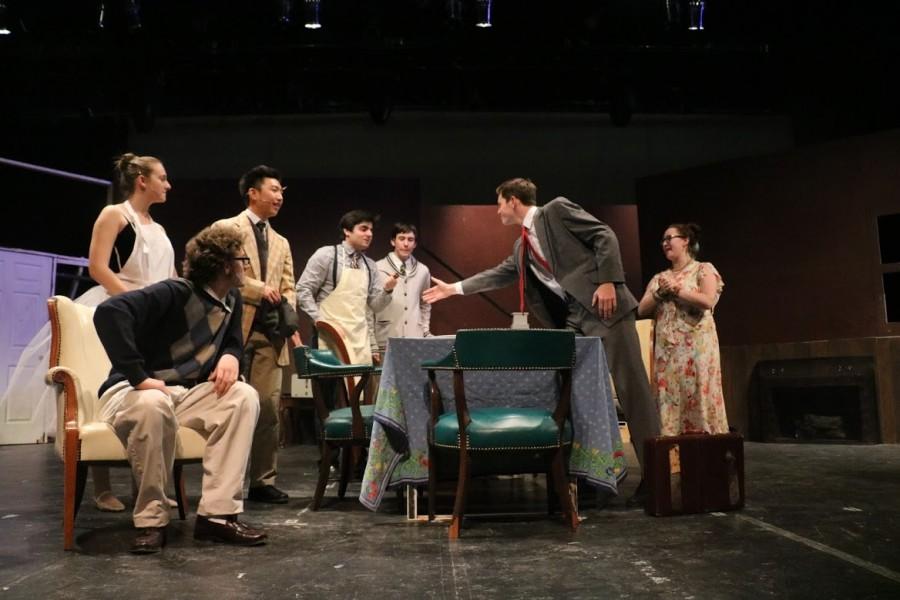 Student dress rehearsal for You Can’t Take It With You. Tickets can be purchased online at wchsarts.com.

‘You Can’t Take It With You’

Despite facing many challenges including six snow days and scheduling rehearsals to accommodate students who are in the play and Blast, the show opened as scheduled.

“The week off for snow days means we missed a week of rehearsal,” said junior Taira Dolan, who plays Mrs. Kirby. “Theater Director Naomi Ratz is extremely organized so we had everything ready by opening night.”

According to Dolan, the cast has enjoyed working together to put on the show. Most find the rehearsals to be a good time but enjoy the live performance.

Senior Griffin Godsick, who plays Mr. Kirby, has fun on stage with his fellow actors and loves “making people lose themselves in a wonderful show.”

As a result of spending so much time getting the show together, many of the cast members have greatly improved their acting skills since the beginning of rehearsals, according to Ratz.

“I’ve seen fantastic growth within members of the cast since our first rehearsal,” Ratz said.

Putting on the play requires students to balance school work, rehearsals and other theater work, such as memorizing lines, along with other extracurriculars.

“The most challenging part has been finding time to get in all my school work and staying after school for the play rehearsals,” sophomore Areya Campbell-Rosen said.

Ratz is hoping that the play will draw a large crowd to support the cast members and watch their hard work pay off.

According to Dolan, the cast promises to bring audiences “giggles, chuckles and snorts.”

You Can’t Take it With You is a comedy that features “general mayhem, sprinkled with a touch of hilarious chaos,” Godsick said.

This year’s theme of Elements incorporates songs that represent the four classic elements: earth, air, fire and water. The broad theme has allowed director Matthew Albright to incorporate many different genres of music into the production.

Blast also has many new features, such as enhanced lighting with “double the amount that we had two years ago” and more dancers that will improve the visual quality of the performance for audiences, according to Albright.

“The level of dancing is awesome this year,” Albright said.

“Since I’m a pom, I’ve become very accustomed to performing in gyms and on football fields, so I’m excited to dance in a different setting,” junior Tatiana Teixeira said.

Additionally, student costume leader Michelle Gelling has worked with many of the student leads to find and buy costumes for their different numbers.

“There are definitely some numbers that have fun costumes that I’m excited to see come together with the good songs,” Gelling said.

On top of new visual elements, the Blast band has collaborated with the singers to accompany each song.

“It is a great experience being able to work with singers and dancers,” Ratinov said. “It involves lots of managing and communication skills — something we musicians don’t do that often.”

Veteran Blast performers are excited to participate in their final run of the show and end their time in the production on a high note.

“I’m really excited about how good Blast is going to be this year,” senior and Blast vocal captain Natalie Hwang said. “We have an awesome cast, a great set list of songs, talented singers and cool costumes.”