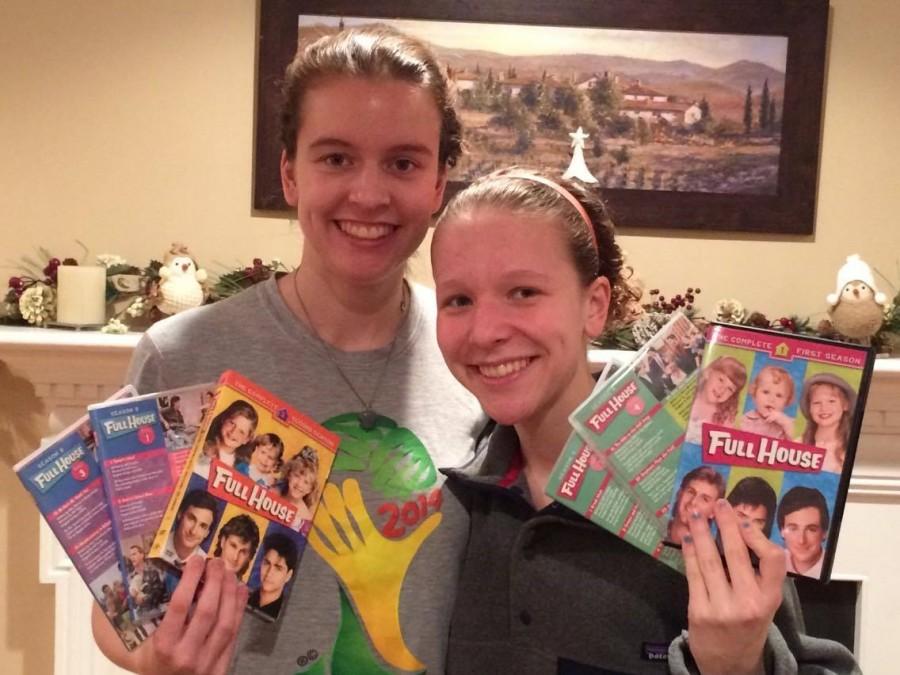 Senior Sarah Bomfim and her freshman sister Emma received every episode of Full House from their parents and are excited for Fuller House to come out Feb. 26, 2016.

The family comedy TV show Full House premiered 28 years ago in 1987. The final show aired 20 years ago, and Full House fans have been waiting for a new season to come back to the television screen. After a long wait, the Full House team responded to its viewers, “You got it, dude.”

Fuller House has brought the gang back together and is set to premiere on Netflix on Feb. 26, 2016.
Full House was a sitcom about a widower (Bob Saget) trying to raise a family with the help of a brother-in-law (Dave Coulier) and a childhood friend (John Stamos). Fuller House, the sequel of Full House, follows the eldest daughter, DJ Tanner (Candace Cameron Bure) on her journey to raise a family, similar to her father’s.

The only characters not returning are Mary-Kate and Ashley Olsen, the twins who rotated in the role of the youngest child, Michelle.

According to Us Weekly, the producers are going to explain the absence by explaining that Michelle moved to New York to pursue her fashion career.

Full House has had a lasting impact, as reruns still air on various TV stations.

Freshman Emma Bomfim and senior Sarah Bomfim have all of the DVDs from the original show.

“My mom watched it when she was a kid, so she gave the first season to my sister and I, and we really liked it so we kept watching it,” Emma said.

The show contains various relationships, different age groups and lighthearted comedy that makes it a must watch for the entire family.

“I like Full House because of all of the different family aspects of it,” Sarah said. “Additionally, the show is funny and happy, so you finish the show feeling good. It’s also based on real life so while you’re watching it you can relate to the different characters.”

Although Full House was very successful, many are skeptical that the sequel will not be as successful.
“I think Fuller House will be good but not as good as Full House,” Sarah said. “I think it’s always hard to outdo the original.”

According to freshman Roya Nassaj, the thing she is mainly looking forward to is witnessing how the cast has grown over the years.

Other students agree on what they are anticipating the most.

“I am most looking forward to seeing what the characters have done in the years in between the two shows and how the relationships will have changed or stayed the same,” Sarah said.

This sequel allows people of all ages to reminisce about their childhood.

“It was always on; I watched it daily if not weekly,” Pre-Calculus teacher Stacey Fisher said. “I liked it because it’s always a happy ending and you can relate to some of the problems.”