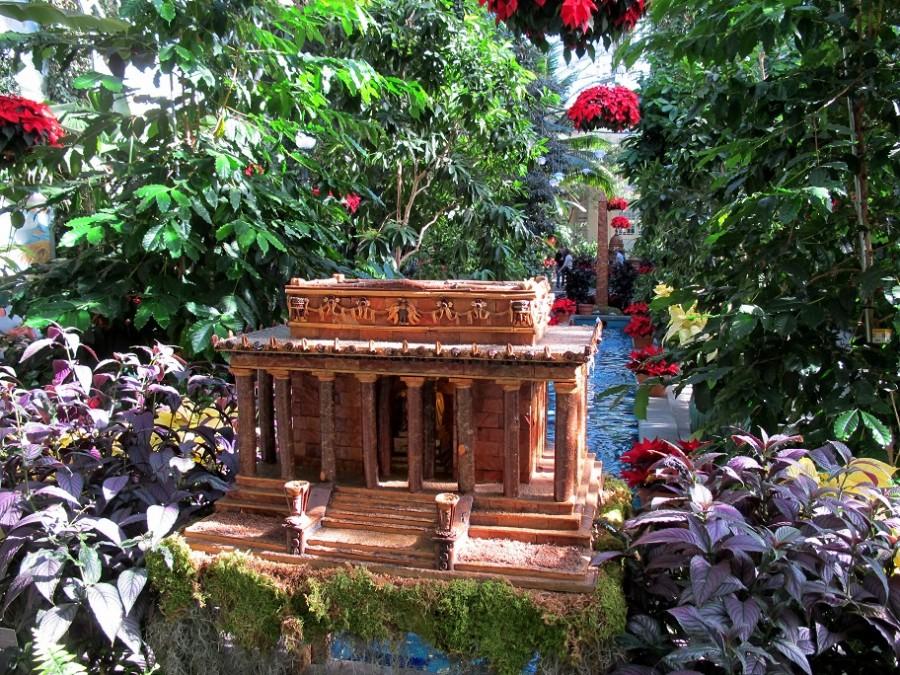 The Botanic Garden contains miniatures of famous D.C. landscapes created entirely from plant material. Above is a miniature of the Lincoln Memorial and below is a reproduction of the Washington Monument.

The holidays are a time to be spent with family, and CHS students’ close proximity to Washington, D.C. allows them to spend time with family while also enjoying some of our nation’s tourist destinations and their special holiday exhibits.

The Botanic Garden will be decorated with trees and poinsettia plants for the holidays. Miniature trains will run on tracks made from plants in the East Gallery, and miniature replicas of many Washington D.C. landmarks, made entirely of plants, will be on display in the Garden Court. Additionally, the Pollination Station will be open and visitors can explore large plants, flowers and pollinating insects all around the Botanic Garden.

“One of my favorite aspects of the show, that I think would be interesting to high school students, is the creativity of the many sculptures and buildings that are part of the show – all built of plant materials,” said Devin Dotson, Public Affairs and Exhibits Specialist of the U.S. Botanic Garden. “From D.C. landmarks such as the U.S. Capitol, Lincoln Memorial, Washington Monument and many others to our oversized sculptures of plants and pollinators in the train exhibit gallery, they are great works of art.”

The Art of the Airport Tower exhibition will display 50 photographs of airport towers from all around the world, taken by Smithsonian photographer Carolyn Russo. The goal of the exhibition is to allow the public to understand the art and symbolism behind each airport tower. Some significant towers include the Ford Island Tower, which survived the Pearl Harbor attack on Dec. 7, 1941, and the tallest tower in the world in Bangkok, Thailand, at the Suvarnabhumi Airport. Other U.S. airport towers such as the tower at Ronald Reagan Washington National Airport, Edwards Air Force Base and LaGuardia Airport are also featured.

The exhibition features the Postmaster General’s Art Collection, which the Postal Museum obtained from the U.S. Postal Service. Thirty pieces of artwork, which display the art styles used to create some iconic stamps, will be shown. The artwork is divided into six categories: Baseball, Broadway, City Life, Icons, Music and Politics/Government. Works from all six categories will be on display. The art will focus on the elements that have made New York City what it is today.

Kay WalkingStick is a member of the Cherokee Nation and is a well-known Native American artist. This exhibit will feature over 75 pieces of her artwork including her paintings, drawings and sculptures. Some of her paintings are landscapes and will also be displayed. The collection is made up of artwork that WalkingStick has created over the last 40 years and showcases the changes in her work over time.

Scaling Washington will feature photographer Colin Winterbottom’s images of the restoration of the Washington Monument and Washington National Cathedral following the August 2011 earthquake. Many of the images were taken from scaffolding to allow Winterbottom to get up high and close to the buildings. The goal of the photographs is to allow audiences to appreciate the beauty of the buildings and see them with a different perspective.