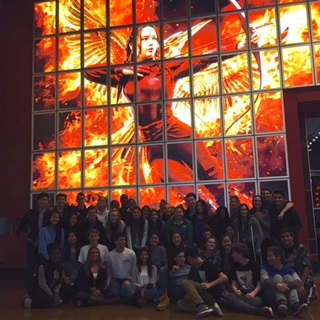 The last installment in the Hunger Games, Mockingjay Part 2, debuted in theaters Nov. 20.

The last movie immediately started from where part one left off on Peeta’s unstable condition and attack on Katniss, so for those who haven’t read the books or watched the previous film, it will take a couple of scenes to really figure out what’s going on in the movie.

Mockingjay Part 2 has the most action-sequences by far compared to the previous films. The beginning of the movie is slow and builds up to the action-sequences, but once the fighting begins, it does not stop until the end. Director Francis Lawrence does a good job illustrating the battle between the rebels and the Capitol as he provides suspenseful, terrifying scenes that can make the audience jump out of their seat a little.

Along with the dramatic action-scenes, fans cannot forget about the love triangle between Katniss’ longtime companion Gale and her hunger-games partner Peeta.

There were both sentimental scenes between Katniss and Gale or Katniss and Peeta, but the struggle of trying to bring back Peeta from the tortured, capitol brainwashed version of himself provided the most sentimental scenes within the movie. The theme of “real or not real” between Peeta and other characters, especially Katniss, reoccurred throughout the film and helped break-up the intense fighting scenes.

In retrospect, the movie was actually immensely depressing due to the fact that a lot of characters die back-to-back where it almost seems like the one scene could not end without someone dying in a brutal way, revealing the darkness of war.

The end in particular looked like a bloodbath, and one of the most important, dramatic scenes occurred in a blink of an eye then switched to a new scene, leaving the audience with little time to process what just happened.

After that intense scene, the last 20 minutes of the film were filled with jaw-dropping twists between President Snow (Donald Sutherland), President Coin and Katniss. Then a bittersweet end came for characters.

Katniss Everdeen continues to be a fictional character that symbolizes the contemporary women of today and how they are strong and persevere through any obstacle. She experienced so much trauma and death and now is trying to live a joyful life.

Others have stated that the movie did not have a satisfying end, however, I still recommend the movie because even though it is a little bit of a somber ending there is still happiness for Katniss and other characters that fans of the book should still see and for others to get closure to the end of the series.

I give the movie a solid eight out of ten because it is action-packed with romance mixed in, keeping the audience alerted and entertained.