Senior sketches out a future in the art industry 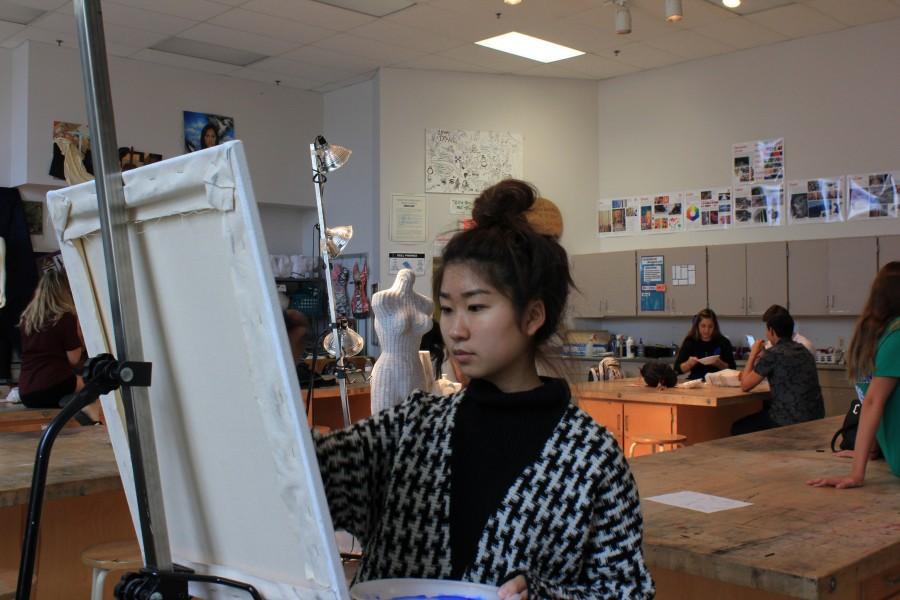 Senior Sophia Kim is a musician and avid painter whose favorite painting is of her parents. She was inducted into the National Society of Arts and Letters and has traveled to Korea to paint for the less fortunate.

Senior Sophia Kim is both a visual and an auditory artist. She has been painting ever since she learned how to hold a pencil, and she has been playing viola for three years. Before that she played violin for a little over five years.

Kim was inducted into the National Society of Arts and Letters in May. She has won two Silver Key awards from the Scholastic Art and Writing Competition and five honorable mentions. Her work has also been displayed at school art festivals and has been featured in the Korean Times newspaper.

“I’ve gone to Korea a couple of times to perform for the less fortunate with an orchestra that ties in with my church,” Kim said.

Kim has always been surrounded by art. Her mother studied music in college, and her father is an architect, so she learned and got inspiration from them. She also simply enjoys the arts.

“Sophia is very hard working and is determined when it comes to the arts,” said Sebastian Kim, Sophia’s father. “She knows how to paint not only with the good techniques but also with the emotions that bind her artwork together.”

According to Kim, her favorite art piece is a personal one–a portrait of her parents.

“She has the ability to depict human relationships and human interactions with a sensitivity that is mature well beyond her years,” studio art teacher Jacquelyn Washam said. “Her portraiture work is beautiful and filled with an emotional quality that seasoned artists strive to capture.”

Kim loves to paint with acrylics and oil although she has just started using them.

“She can easily start making artwork if you give her a pencil and paper,” Sebastian said.

Kim also plays the viola in the competitive American Youth Philharmonic orchestra, which represents the best musicians in the United States of America.

Kim has been a part of the CHS orchestra for two years now, where she is second chair; however, she focuses mainly on her visual art.

Kim plans on pursuing art as a profession.

“Sophia is an introvert and has a quiet nature about her, but her work sings, she is able to capture her feelings and thoughts through the visual language of art and that’s what makes her work so unique,” Washam said.