Marvel’s Daredevil is the newest TV hero to watch 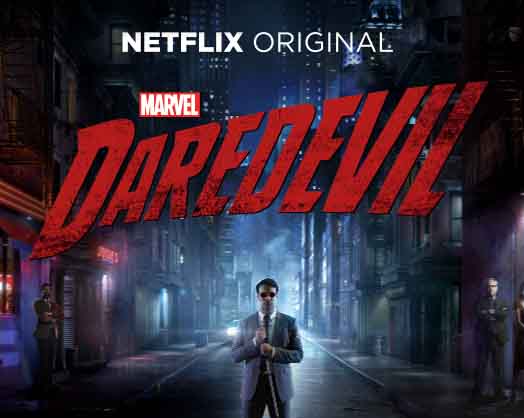 Daredevil compensates for his blindness by using his scent-tracking and hearing powers to defeat villains in the recent Netflix series.

Guardians of the Galaxy and Avengers: Age of Ultron have both proven that Marvel knows what it is doing in terms of making movies. The new Netflix original show Daredevil continues Marvel’s legacy in its own unique way.

Daredevil premiered April 10 and introduces a new character into the Marvel cinematic universe. Matthew Murdock (Charlie Cox, Boardwalk Empire) was blinded as a child from radioactive toxins and gained super-human senses that allow him to detect everything that is around him, even though he still cannot see. He can hear people’s heartbeats, detect vibrations within the air and smell scents from miles away. During the day, he helps the city, Hell’s Kitchen, as a lawyer, and at night he protects the city as a secret vigilante known as Daredevil.

The plot of this show may sound a little strange, but Marvel seems to have a track record of making weird plots into really good entertainment. Guardians of the Galaxy featured a talking tree and a wise-cracking raccoon, yet it was one of Marvel’s best movies.

While most Marvel movies are fairly light-hearted and almost comedic, Daredevil is the complete opposite of what one would expect from Marvel.

The tone of this show is very dark and grim. The plot-lines delve into delicate topics, and the violence is extreme. Some of the fight scenes in this show even give Game of Thrones some competition in goriness. The fights can get very intense.

Murdock may be a great fighter, but he is not exactly a superhero. His fighting style resembles Batman as he uses stealth and martial arts to his advantage, but that does not help him against guns and explosions. There are many parts in this show, where Daredevil is beaten by his opponent and cannot save the day, which humanizes him.

While he may be a more realistic hero, he still uses his abnormal abilities to his advantage. While interrogating criminals, he can hear the person’s heartbeat to detect whether the person is lying or not. He can also hear people scream for help, even if they are miles away.

A good superhero adaptation is never complete without a good villain, and Daredevil delivers. Wilson Fisk, played brilliantly by Vincent D’onofrio (Law & Order: Criminal Intent), is a corrupt businessman who seeks to make Hell’s Kitchen a more peaceful city, through his own twisted vision.

What makes Fisk so interesting is the fact that he is one of the more human villains. Even though he is a vicious person, he is very socially awkward and does not really know how to handle confrontations. He has a love story that develops throughout the show, creating entertainment as he has no idea how to act in these situations.

One episode of the show takes a look at Fisk’s backstory and explains how Fisk turned into such a sadistic person. This helps develop Fisk’s character and lets the audience know more about Fisk and why he acts the way he does.

Fisk still makes a worthy opponent for Murdock due to his brute strength. Murdock may have better fighting strategies than Fisk, but Fisk’s stature almost resembles the Hulk, allowing him to deliver powerful blows that plow through Murdock’s defenses. The last fight between Fisk and Murdock is one of the best scenes of the show and gives the season a great finale.

Overall, Daredevil is a fantastic show that combines intense action and interesting twists to keep the audience excited to see what happens next. Marvel fans should be impressed by this show’s change in tone, but they may be a bit surprised at just how violent and disturbing the show actually is. The show is rated TV-MA and all of season one is available on Netflix right now, so start watching, CHS.