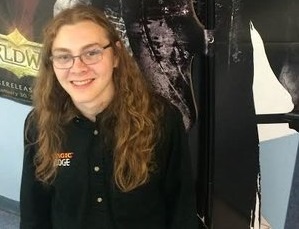 Sophomore Autumn Cook is an avid player of Magic: the Gathering.

Sophomore Autumn Cook spends her free time playing and judging Magic: the Gathering games. Her job is to set up who plays against whom, answer rule questions and deal with any rule violations.

Magic is a trading card game created by Richard Garfield and first published in 1993 by Wizards of the Coast. It continues to have millions of players to date.

“The game is very thinking intensive,” Cook said. “The whole premise is that it is a resource management game.”

To play the game, one must have a deck of Magic cards. Each player begins with 20 life and energy and the goal of the game is to leave the opponent with no life by using the deck the best way possible.

Mana is the energy that comes from one’s location. Players add to their mana pool as they play the game. A player begins the game with zero mana. Mana comes in different colors. For instance, mountains make red mana and forests make green mana. A card’s mana cost tells you how much it costs to cast a spell.

“What I enjoy about Magic is that my brother and I played it together as young teenagers and still today,” junior Nathan Berg said. “Instead of battling frustrations out with pillow fights or nerf guns, we battled it out with simple and strategic cards.”

The world of Magic contains different “planes” or worlds. The categories of cards are creature, artifact, enhancement and planeswalker. Planeswalkers are people who can travel from world to world and are the most important characters in Magic.

In Magic, every card comes with its own history. Players become invested in not only the game, but the stories of these characters as well.

“Playing has helped significantly with my math and communication skills,” Cook said. “I feel more confident talking to large groups of people.”

An important goal of the Magic creators is to have widespread representation portrayed in the characters of the game. Recently, they have released two new characters, Alesha and Narset.

Alesha is a transgender woman who is referred to as the woman who smiles at death. After slaying a dragon, instead of taking a gritty and tough war name she comes out as a girl, and is accepted.

Narset has a huge urge to learn and a brilliant mind. She was mentored by a dragon called Ojutai and was his youngest and brightest student.

According to Magic creator and designer Doug Beyer’s tumblr blog, Narset is on the autistic spectrum because “she processes information and input differently than a lot of other people.”

“I love that there is a transgender character, but, they could certainly do more with people of color,” Cook said. “They recently said at a convention that they’re trying to push more about it.”

Students can buy the cards at any trading card store, it is also often sold at comic book shops. In addition, the games are played at Dream Wizards in Rockville.