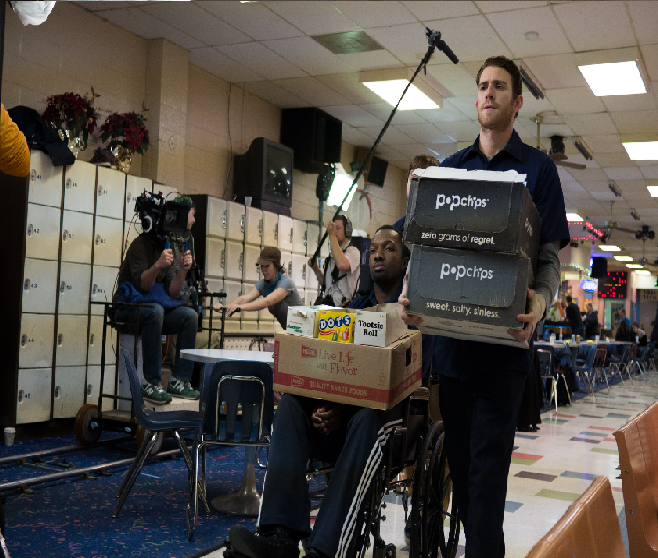 As I scrolled through Twitter this past December, I discovered that an actor, Bryan Greenberg, from one of my favorite television shows, One Tree Hill, was filming a movie in Maryland. After much Internet stalking, I found out that the movie was being filmed on a street where the director Stephen Suettinger grew up, the same street where a friend of mine lives. After contacting Suettinger, we were thrilled to be able to be extras in the background of the movie.

Suettinger recently finished filming his first film, A Year and Change, shot on location in Maryland. Suettinger is the director and co-writer of the film, which is co-produced by his company Pebble Hill Films and producer Emily Ting’s Unbound Feet Productions.

A Wootton alumnus, Suettinger grew up in Potomac, so he chose to set his movie in Maryland, including several locations in Montgomery County.

“I always felt like Maryland would be the perfect setting for this movie,” Suettinger said. “The story takes place over a year, and I wanted to be able to capture the changing of the seasons in the movie. Montgomery County was a perfect backdrop for the characters.”

According to Suettinger, he tailored some events and places in the movie to his own experiences of growing up here.

“Though the script didn’t necessarily take place here when I first read it, I ended up ‘Maryland-izing’ the script to tailor it to this specific area,” Suettinger said. “The setting absolutely influenced the movie. I think shooting here gives an authenticity to the movie that we would not have been able to achieve had we shot on a backlot or on a sound stage somewhere else.”

According to a December 2013 Gazette article, Ting was impressed with Maryland’s film scene because of its hospitality and professionalism.

“We may not be Los Angeles or New York, but there is ‘access’ to the industry here in Montgomery County,” Suettinger said. “The crews here are as professional as you’d find there.”

A Year and Change follows a year in the life of Owen (Bryan Greenberg, One Tree Hill), a vending machine proprietor who decides to change his life after falling off of a roof at a New Year’s Eve party. The film also stars Claire van der Boom (Hawaii Five-0) as Owen’s love interest as well as T.R. Knight (Grey’s Anatomy), Marshall Allman (True Blood) and Jamie Chung (The Hangover Part III).

When I was called to be an extra for a scene in a duckpin bowling alley in Silver Spring, I experienced the filming of a movie first hand. As an avid One Tree Hill fan, I was ecstatic to be able to meet Greenberg and watch him act in real life, and I did my best not to swoon every time he looked my way.

Something that surprised me the most about filming, besides the shock that came every time I remembered that I was being filmed in the background of an actual movie, was the amount of time that each shot requires. Because they needed to film a scene from all different angles, just a few minutes of the scene took several hours to film. The process made me feel a bit like I was watching a movie stuck on repeat.

Being an extra, it turned out, was not too difficult and even came with some perks. For one thing, I had access to unlimited bowling—although, after six hours, duckpin bowling can lose some of its appeal. During one particular scene, I was instructed to sit at a table and to continue studying while the camera was rolling. I am confident that my Spanish teacher will thank me if my textbook makes it onto the big screen.

Another scene required me to walk across the set and sit down at a booth behind the main actors. This role, which I had to repeat many times, I took with the utmost seriousness and hoped my pantomime skills could put a Broadway star to shame. When the day of filming was over, I returned home ready to embrace my superstar status, eager to see myself in the background of the film.