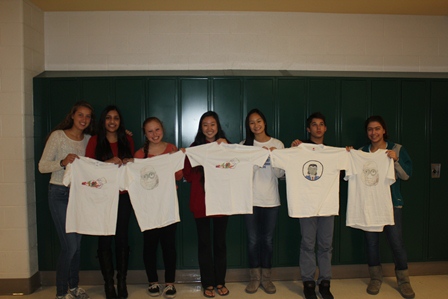 One morning while walking through the hallway, you spot out of the corner of your eye a tiny tea cup on the cuff of someone’s short-sleeved shirt.  You question it but move on. Later that night while scrolling through your Instagram, you see it again. This time you click on the user and it all makes sense.

The tiny tea cup is junior Rachel Park’s signature at the end of her t-shirt sleeves; this year she began designing, making and selling her t-shirts to CHS students through her company Tee Party By RP.

“I used to make shirts for myself, and a lot of my friends wanted to buy a shirt from me,” Park said.

Park takes drawings from her sketch books and turns them into designs for her t-shirts, some of which include a tie-die Bart Simpson and a ying yang. She also allows customers to create their own design for her to put on the shirts. Once Park has the design, she prints the image out on transfer paper and then uses a heat press to transfer the design to the t-shirt.

Unlike typical high school entrepreneurs, Park decided that she would donate the money she makes from the shirts to charity.

“Growing up, I took water, food, etc. for granted, and I wanted to give to a charity that helps children who lack these resources and focus on helping children, because to me, a good childhood is very important,” Park said.

Park chose to donate profits from her shirts to the charity Save the Children, an organization that helps support children in developing countries and assists in relief efforts.

“I’ve heard about the organization before, so I looked into it,” Park said. “I really liked what they were doing, so I thought that it would be a good organization to donate money to.”

Park relies mainly on word of mouth to advertise to CHS students, but she also posts pictures of her shirts on her Instagram account, Tee Party By RP, which is how junior Michelle Dan learned of the company.

“The designs are really creative and the shirts are well made,” Dan said.

So far Park has sold only 20 shirts, but has high hopes to continue to donate as much money as possible to help improve the lives of children across the world.

“I want to raise money for different charities and help those in need,” Park said. “I also hope that my company sparks some ideas for people to get involved and help those who are not as fortunate.”